Stagecoach has continued to demonstrate its commitment to connecting the communities of Middlesbrough, Stockton and Hartlepool with the introduction of 18 brand new buses. The buses feature state-of-the-art technology, including large rear destination screens and audio visual next stop announcements with scrolling LED displays. Stagecoach worked with local community groups, North East Action on Transport and Safe in Tees Valley, as part of a wider programme of engagement. The local Stagecoach team has been working with key user group, North East Action on Transport (NEAT), to develop the next stop announcement technology for passengers with visual impairments, and hosted a consultation with its members to encourage feedback on vital aspects, including volume, timing and clarity. NEAT is an informal user led group with aims to make public transport more accessible to people with a visual impairment. The group is comprised of service users and staff from sight loss charities and organisations, such as Guide dogs and RNIB. 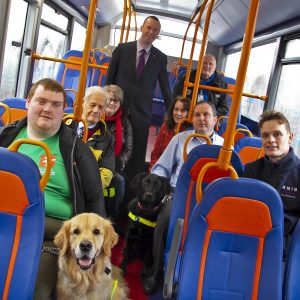 Angus Huntley, Empowerment Officer for Newcastle Vision Support, said: "North East Action on Transport welcomes the introduction of the new vehicles on Teesside and the audio announcements and visual displays, which now make bus travel much more accessible to people with sight loss. We believe the introduction of this technology is an important step in improving the travel experience for people with sight loss, helping them to feel more confident and be more independent."

Linda Oliver, Guide Dogs Engagement Officer North East, said: "Research from 2014 shows that nearly two thirds of passengers who are blind or partially sighted missed their stop at least once in the last six months. Audio visual next stop announcements enable people with a visual impairment to understand where they are and when they need to get off the bus. Guide Dogs welcomes the introduction of this technology on Stagecoach buses in the Tees Valley area."